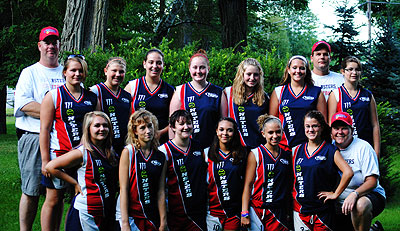 The 2011 MAYSA Monsters played in four tournaments:  MAYSA Triple Play, 14U States, Coca-Cola Classic, and PAMDIF where we placed third.  This was the first year that we joined the CAYSA league which kept us busy playing through the month of July.  Monster players, coaches and parents helped out with concessions at both MAYSA Triple Play tournaments, especially the second one in July, where we had a constant presence in the snack-shack.  Our Belgrade bake sale fundraiser was a huge success again this year.  We are looking to our 2012 season with plans to do more team- and leadership-building, with players taking a more active role in the decision-making and planning for the team.  We would like to thank Coach Lou Atwood for all her support and dedication to coaching our team.  We are very grateful to have such an amazing coach.   – Abby Collier #3 (IF/P) and Hannah Atwood #17 (C/IF)